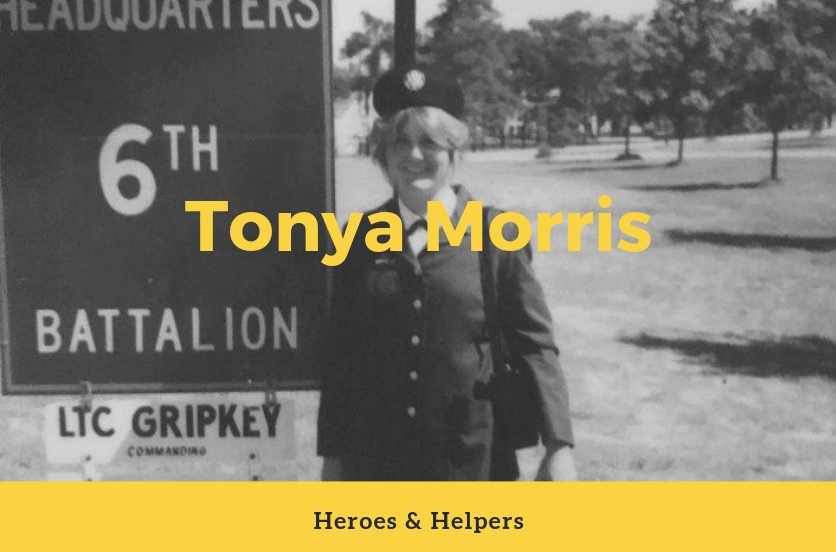 In which Armed Forces branch did you serve?

How long did you serve?

What made you decide to serve?

Tonya wanted to “Be All You Can Be” (Army tag line at the time). She thought it would be cool to be in the military police unit and carry a weapon. After she graduated from high school early, she wasn’t sure what to do. Her mom wanted her to go to France to study abroad but she wasn’t interested. While watching soap operas one day, Tonya saw a commercial for the Army and decided she wanted to go to Hawaii and work with computers, but there were no openings for at least 6 months….now or never! They offered for her to go to Germany and do “clerical stuff” and she agreed…but still had to tell her parents. After they freaked out, because she was only 17, they agreed to sign her over to the government.

Her father was in the Air Force but was still nervous to have his child in the Army, overseas. She did her basic training and Advanced Individual Training at Fort Jackson, SC.  At one point, she decided she had had enough of being bossed around and asked her mom to send money because she was coming home and that they should call Senator John Glenn to make sure it was a smooth transition getting out. Little did she know then, it doesn’t quite work that way. Her mom told her not to come home because it would be the worst decision she could make and that she needed to prove to herself that she could do it and not fail. As per usual, Mom was right but sent her money anyway! Tonya asked if she could use it to go to the beach on her first weekend pass!

After completing her training, Tonya was then assigned to her permanent duty station at Camp King, Oberursel, FRG (West Germany at that time) and was assigned to HHC 4th Transportation Command – responsible for all transportation movement in Europe, Security Plans and Operations, Emergency Operations Center. Tonya worked in the “war room” and was responsible for typing top secret and above war plans and classified communications with all subordinate units.  She maintained classified computer systems and deciphered classified coded messages. While in Germany, the unit connected with their German counterpart and would practice roles during war games.

What is your most memorable or impactful experience over the course of your service?

She got to do a lot of traveling (7 countries) and is thankful she was never sent to war. Tonya also recalls going behind the Berlin Wall. Check Point Charlie is the infamous way to get in and out.

It was a very shocking experience to be there because there were so many people stuck there who couldn’t get back home because they were in the country when the wall went up. It was extremely humbling to be in East Berlin because of the extreme communism and the restrictions everyone there had to live by.
– Tonya Morris

Some other highlights include seeing Russian spies first hand. Tonya made “Soldier of the Quarter” throughout the whole command which is how she won the trip to the Berlin Wall! She had to take a train to cross the border. Special security clearances were required and they put people in a private room to discuss clearances. When Tonya walked into the room, a man looked up from a book and said “they know you’re here”. Tonya responded “who knows” and the response was “the Russians”. They were told Russian Spies would be waiting for them when they arrived and sure enough they were there, waiting for them. Nothing bad came of the encounter but Tonya was very frightened nonetheless.