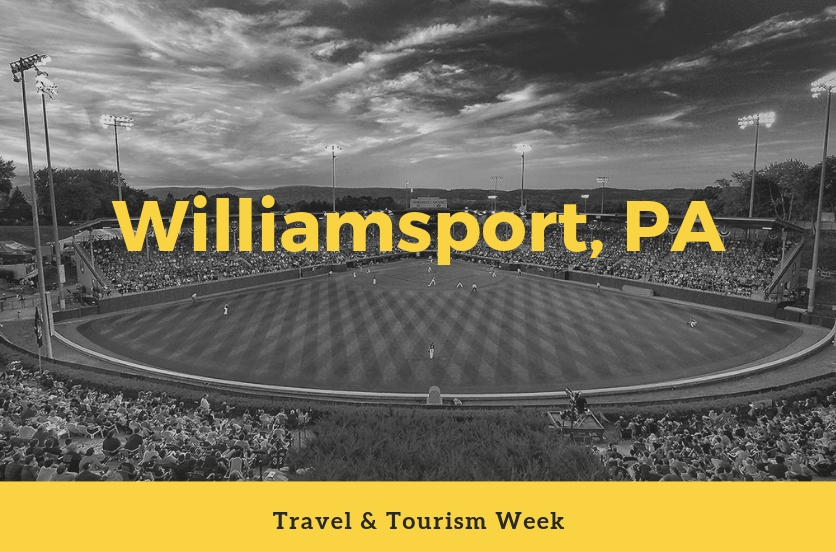 Did you know Little League Baseball started in Lycoming County over five decades ago?! Visitors to Williamsport can see the very baseball diamond where the first game was played as well as the impressive sports complex where the Little League World Series takes place each year before thousands of spectators.

Before Williamsport became the lumber capital of the world in the middle and late 1800s, it was one thing to fell trees and float the timber downriver, but it was another to stop the timber. Major James Perkins solved the problem by building a chain of logs to reach out from the riverbank and “catch” the floating harvest. This gigantic outstretched arm was known as the Susquehanna Boom, and it did, in fact, make the lumber business boom. In the peak days of the lumber era, Williamsport had more millionaires per capita than any other city in the United States.

One of the finest toy train collections in the United States is housed in the Thomas T. Taber Museum of the Lycoming County Historical Society on West Fourth Street in Williamsport. Assembled by the late LaRue Shempp, the collection includes three hundred forty-seven complete trains, one hundred individual locomotives, and two working exhibits. Among the rare pieces on display is a No. 1 Gauge German LGB owned by President Ronald Regan.

Williamsport’s most prominent lumber baron, the wily and fabulously wealthy Peter Herdic was also an inventor. He invented a horse-drawn conveyance-the world’s first taxicab-to take his guests to and from the center of town which he modestly named the “herdic”. Eventually, Herdic’s horse-drawn taxi sprouted wheels and took its place as one of the mainstays of urban transportation all over the world.

Move over Mississippi. The Susquehanna River had its cruise boats, too. The double-decker steam-powered paddle wheeler called the Hiawatha carried up to two hundred passengers from Williamsport to Sylvan Dell Park for picnics and outings. Adults paid a ten-cent fair, but kids rode free. In 1914 the boat fell victim to winter ice, and the spring break-up swept it over the dam. Today, however, a new Hiawatha cruises the waters of the Susquehanna thanks to the Chamber of Commerce and the citizens of Lycoming County who contributed their time, money and imaginations to re-launch her. Enjoy a ride on this historic vessel.

Williamsport isn’t exactly a music Mecca, but it has had composers whose music is known all over the world. One, for example, was James M. Black. Although you probably never heard of him, you no doubt have heard two famous songs he composed, “When the Saint Go Marching In” and “When The Roll Is Called Up Yonder.” The Williamsport Repasz Band was present when Lee accepted the surrender of Grant on April 9, 1865 to play “Yankee Doodle” and the “Star-Spangled Banner.” Today, the Repasz Band is the oldest non-military brass band in the United States.

We put together a list of some of the best-of-the-best in Williamsport:

Click here to find out much more before your next trip to Williamsport!

Takin' it to the Streets - Episode 15