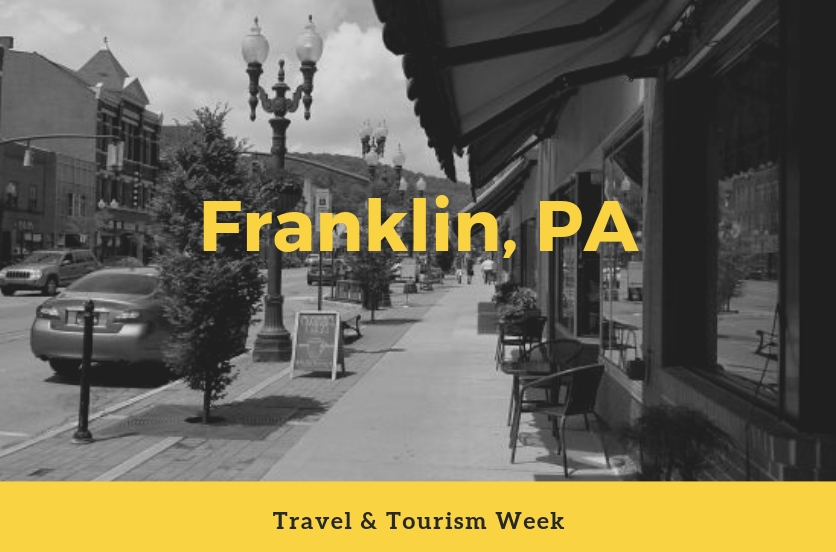 Franklin, PA is rich in history and is a well-documented settlement in Northwestern Pennsylvania. Franklin is located in Venango County where the French Creek and Allegheny River meet. It has a history of being a Native American Settlement when in the 1740’s, Scottish fur trader, John Fraser began a trading post.

In 1753, a young George Washington was sent to the region to warn the French that they were trespassing land claimed by England. Later in the 1700’s, American Colonial Forces constructed Fort Franklin, named for Benjamin Franklin. Andrew Ellicott was commissioned by the Commonwealth of Pennsylvania to lay out the townsite of 1000 acres that was designated “Franklin” in 1795.

In the following years, Franklin continued a slow but steady growth until the region became the center of worldwide oil production. Colonel Edwin Drake successfully drilled the first commercial oil well in nearby Titusville in 1859. Oil production in the region peaked in 1882. After the decline in oil production, Franklin became the County Seat of Venango County. Franklin is made up of light industry and manufacturing with smaller workforces. www.franklinpa.gov/

Franklin is known for its Applefest. Each year in October, people come from all around to enjoy the beauty of the fall season in Franklin. The festival provides free entertainment, 350 food and craft vendors, a farmer’s market, a 5K race, and children’s activities. On display at the festival are hundreds of antique and classic cars and trucks. There is something for everyone at the Applefest.

Some things to do in Franklin are canoeing, kayaking, boating, camping, and fishing. Franklin also has Barrow-Civic Theatre which is a premier venue for performing arts, live entertainment, and theatrical programs. The Venango Regional Airport is located in Franklin that also offers one of the best local restaurants, Primo Barone’s Restaurant & Lounge. In Franklin, you can find River Ridge Farm. This is the mansion where Congressman Joseph C. Sibley lived with his family and where President Woodrow Wilson and William Jennings Bryan wrote “The 14 Points” that helped close World War I. Franklin is also located near the Allegheny National Forest.

There are many local businesses and larger employers in Franklin with IA construction being the 17th largest employer. Some of Franklin’s larger employers are Webco Industries, Honeywell Safety Products USA, inc., IPEG Inc., and UPMC Visiting Nurses Association among many others.

We put together a list of some of the best-of-the-best in Franklin:

Click here to find out much more before your next trip to Franklin!

Takin' it to the Streets - Episode 15
Scroll to top