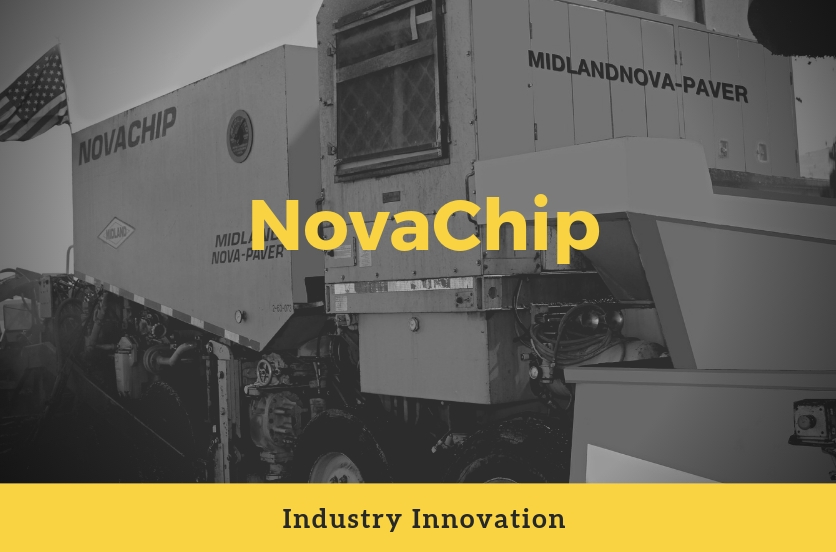 NovaChip® was developed in the late 1980s and was first introduced to the United States in 1992.

Originally developed by SCREG Routes in 1988, the NovaChip® machine used a third-party concept based off of the Microsurfacing machine frame. The first patent for this development was filed in 1989. The process was developed to improve pre-coated chip seals hence the name, NovaChip® which roughly means “the new Chip Seal.”

Timeline in the States

The process involves spraying a heavy layer of polymer-modified asphalt emulsion within inches of the application of the hot mix asphalt. The NovaChip®/Ultra Thin Bonded Wearing Course can be placed as thin as 0.5 inches (12.5 mm) to 1.5 inches (38 mm) thick. The emulsion cools quickly and bonds the asphalt to the pavement rapidly. Compaction is the final step in this process. The newly paver placed surface treatment can be reopened to traffic within 100 yards of compaction completion.

NovaChip was an innovation to the entire paving industry. Barrett Industries viewed this innovative process, along with others that Midland was offering at the time, as something that set them apart from the competition. By acquiring Midland Asphalt, Barrett not only inherited a great group to add to the Barrett Family but also a treasure trove of new and innovative Pavement Preservation processes.