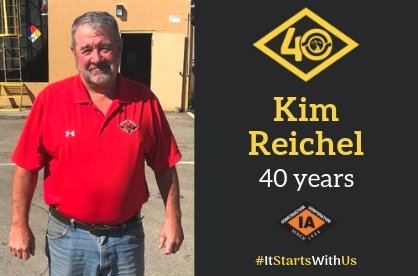 Approximately, when were you hired?
May 1979

Why did you come/apply to IA Construction?
While I was in the service, I did similar work to this and knew once I got out that this is what I wanted to do. I found the position through my friend’s dad who was the Regional Manager at IA Construction at the time.

Can you recall how you felt on your first day?
On my first day, I wasn’t overly excited about flagging at first, but I knew that I had to start at the bottom and work my way up.

What changes, if any, did you notice when Barrett/HRI became a part of Colas?
The changes that I noticed were the [number] of resources that became available to us and the technology capabilities.

How has our safety culture evolved over the course of your career?
Over the years, the safety culture has improved. In the past, it was talked about but no one followed thru with it. Now it is part of our everyday routine.

What advice would you give the past YOU on his/her first day?
The advice that I would give my past self would be “To always wear earplugs around the equipment.”

What has been your proudest/most memorable moment or milestone in your career?
One moment/milestone in my career were my promotions as I started out as a Flagger and worked my up to Construction Superintendent.

If you could describe in one word what Barrett/HRI means to you, what would it be?
In one word, I would describe IA Construction as Family.