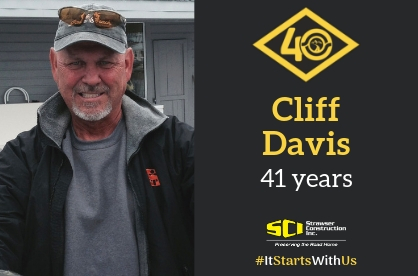 Cliff became interested in a job at Strawser Construction for two reasons: his brother-in-law worked for the company he was excited about the opportunity to work for Mike Buckingham at Strawser Slurry. Cliff recalls being excited for his first day on the job as he states, “it feels just like yesterday that Chauncey Sr. was telling me we are working on that street right there and handed me a scrapper.” 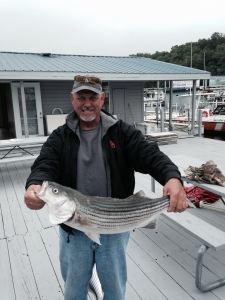 From then Cliff’s career evolved as his responsibilities started to increase. Throughout the seasons, Cliff’s job responsibilities changed immensely. He went from cleaning streets to running box to operating a paver and then working on a paver. To expand his knowledge about paving, Cliff attended hydraulic classes at the Bergkamp Paver School. He wanted to learn more about the ins and outs of paving, different mixes that Strawser could use, chemical compounds, and how it all comes together and works. As Cliff grew and developed himself within his career, Strawser Construction was maturing as well. Equipment types and quality of the machines was enhanced as well as the influence on employee’s safety.

With the transition of the safety culture, it became very noticeable to Cliff that the organization cared about him making it home the same way he arrived to work; SAFE. Over Cliff’s 41 years with the company, his biggest influencers have been Chauncey Nance Jr., Jeff Harless, Dale Ernst, Marty Raypole, Dave Kiser, Ben LaJoye, and Shane Geise.

Thank you, Cliff for 41 loyal years of hard work and dedication!

“We are one big Family” ~ Cliff Davis