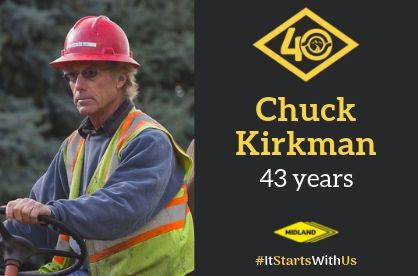 He was attracted to the position at Midland because of some of his peers from a previous company stating only good things about the company. As his first day approached him, Chuck was not nervous but excited, as he knew what was expected of him.

Throughout Chuck’s 43 years at Midland, he has watched his career evolve from where he started out as a transport driver, then transitioned into a distributor operator, and then became an equipment operator. As he’s had the opportunity to wear many hats, his favorite position was mix-paving operations.

As a driver, Chuck spends most of the day by himself. His customers mean the world to him and he becomes extremely proud when they request him personally. Looking back at his journey, Chuck would tell his past self:

“Do your best and learn all you can. Don’t limit yourself.”

Thank you, Chuck, for 43 great years!

What is Distracted Driving?
Scroll to top